The Truth Behind What's Actually Living On Our Favourite Statues…

posted on 2.9.19
Atlas Biomed, the UK's leading DNA and gut microbiome personalised healthcare company, have created the first ever microbial map of Europe's iconic monuments. The study has shown that the identifiable bacteria found on monuments are mostly harmless, but a few are linked to disease and can be potentially dangerous for humans. 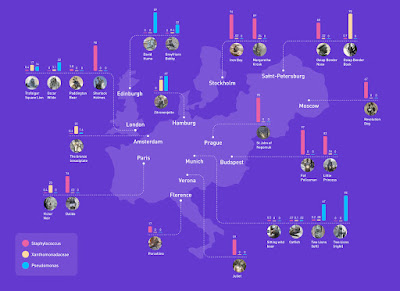 In a recent citizen-science project, Atlas Biomed and their team of microbiome experts visited 13 cities across Europe including London, Edinburgh, Florence, Paris and Amsterdam to collect swab samples to analyse what bacteria lives on 24 different famous statues.

With the summer holidays now in full swing, these statues will become some of Europe's major tourist attractions, drawing crowds of people from all over the world.

Some of the bacteria detected, such as Staphylococcus, can be potentially dangerous and can lead to infections including sepsis, conjunctivitis, cystitis as well as endocarditis. For those with weaker immune systems, hand-washing soon after contact with a monument is advisable.

Another potentially life-threatening bacteria lurking on the monuments is Pseudomonas, which may cause folliculitis and ear canal infections.

Other insights showed that London's Oscar Wilde statue has the highest bacterial diversity in Europe. Conversely, Bender's Book from Saint-Petersburg was the least diverse.

A total of 29 different bacterial genera were found across all samples, including some with surprising origins. Several bacteria usually associated with plant disease were detected, as well as two genera that can be found in the human gut. It's likely these bacteria hitched a ride through the air or possibly on someone's hands.

Strikingly, several monuments from different countries shared similar microbial signatures. One similarity stood out in particular: London's Trafalgar Square Lions shared the most in common with Amsterdam's Bronze Breastplate, which is embedded into a cobbled street in the red-light district. Why? Atlas Biomed experts surmise that it's due to people's feet touching these icons, rather than their hands.

The study by Atlas Biomed proves that getting up close and personal with some of these lucky statues might not be such a good idea. As humans, we are naturally inclined to physically interact with our environment, and cultural enrichment is an intrinsic part of the holiday experience, especially when you head to a European capital. Usually we habitually touch our faces hundreds of times a day. So, if you are planning on visiting a statue (and possibly touching it, or even rubbing it for luck), make sure to wash your hands thoroughly afterwards. Atlas Biomed experts have also advised not to rub your eyes after touching these statues, and to always wash your hands with clean water and soap after visiting these tourist spots. If that's not possible, keep tea tree oil in your bag, which is naturally antibacterial. Another crucial tip from the microbiome team to keep dangerous bacteria at bay, as well as keeping your gut happy, is to avoid drinking water from outdoor fountains and instead use refillable bottles with a filter.

The CEO of Atlas Biomed, Sergey Musienko, says: "The diversity of microorganisms that are present in, on and around humans comprise a significant component of overall health. It's important to remember that, just because a bacterium has the potential to make us ill, it doesn't mean it will. There are a lot of factors that enter into this equation, like the quantity of bacteria present (our swab samples didn't allow us to assess this) and how weak or strong a person's immune system is."