posted on 11.9.19
The National Galleries of Scotland and Tate announced today the autumn season of ARTIST ROOMS exhibitions with partner museums and galleries. Displays across the UK include iconic photographs by Diane Arbus at Leamington Spa Art Gallery & Museum, Vija Celmins’ exquisitely detailed drawings at Quay Arts on the Isle of Wight, pop art pioneer Roy Lichtenstein at Hatton Gallery in Newcastle, and portraits by August Sander at National Museum Cardiff. 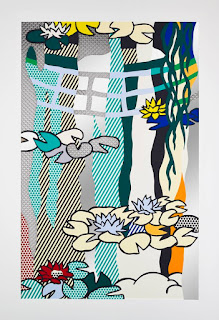 Photography is in the spotlight this autumn with exhibitions showcasing two of the most influential photographers of the 20th century. Participating in the ARTIST ROOMS programme for the first time, Leamington Spa Art Gallery & Museum will present Diane Arbus (20 September - 1 December 2019), featuring work from across Arbus’ career. The exhibition includes formative early photographs from the mid-1950s produced with a 35mm camera, shown alongside her evocative portraits such as Girl in a watch cap N.Y.C. 1965, 1965. ARTIST ROOMS returns to Wales with August Sander’s monumental project, People of the Twentieth Century, at National Museum Cardiff (26 October 2019 - 1 March 2020). Part of NMC’s major new photography season, the exhibition will feature over eighty portraits from Sander’s best-known series through which he aimed to document a collective portrait of the German nation.

Continuing its tour of the North of England, ARTIST ROOMS Roy Lichtenstein will travel from the Grundy Art Gallery in Blackpool to the Hatton Gallery in Newcastle (28 September 2019 - 4 January 2020). Newcastle played a pivotal role in the history of pop art in Britain, with artist Richard Hamilton teaching at the University in the 1950s, so it is a fitting location for this exhibition of his US pop counterpart’s large-scale screenprints, generously on loan to ARTIST ROOMS from the Roy Lichtenstein Foundation. Made in the 1990s towards the end of Lichtenstein’s life, they highlight key themes that preoccupied him throughout his career, from reflections and mirroring to a love of jazz.

The Isle of Wight is widely recognised for its rich biodiversity and UNESCO Biosphere Reserve status. Quay Arts in Newport will present an exhibition of Vija Celmins’ mesmerising prints and drawings that bring the artist’s intense focus to the seemingly limitless aspects of nature - from the surface of the ocean to the night sky, and the intricacies of a spider’s web (21 September - 16 November 2019). With their subtle, shifting perspectives, Celmins’ examination of our environment invites us to reflect on the scale and complexity of the world around us.

Opportunities for young people to participate in creative projects and learn new skills are developed alongside each ARTIST ROOMS exhibition, made possible with Art Fund and Arts Council England support. Leamington Spa Art Gallery & Museum’s #HumansofLeamington campaign will be launched with portraits of local creative people displayed around the town and online. Hatton Gallery’s L-INK young people's group will be working together on a year-long project until June 2020, and National Museum Cardiff’s Young Heritage Leaders will develop photography workshops and curate a display within the gallery.

This forthcoming season of exhibitions in partner venues adds to current displays including ARTIST ROOMS Ed Ruscha at Tate Modern (until Spring 2020). Featuring works spanning the entirety of Ruscha’ six-decade career, it includes large text-based paintings and his iconic photographic series. With a continued focus on photography within the ARTIST ROOMS collection this autumn, ARTIST ROOMS Self Evidence | Photographs by Woodman, Arbus and Mapplethorpe at the Scottish National Portrait Gallery (until 20 October 2019) explores self-portraiture and representation in these influential artists’ work. Looking ahead to 2020, highlights include a presentation of Richard Long at Thelma Hulbert Gallery in Devon, a new partner in the ARTIST ROOMS programme, which will commence their year-long programme focused on the environment (February-May 2020), and a significant display of Louise Bourgeois’ work at Tate Liverpool (30 July 2020 – Spring 2021), including sculptures, prints and drawings.

2019 marks a remarkable first decade of the ARTIST ROOMS national programme, with nearly 50 million people having visited the 185 displays held at some 87 venues across the country.