Five tips for building an audience for your podcast

The hosts and co-founders of Dope Black Dads, No Country for Young Women and #QueerAF share how they established themselves in an increasingly crowded field

Podcasting has dominated the media landscape over the last few years, with a wide range of publishers grabbing their mics and hitting record. However, with hundreds of thousands of podcasts already covering topics from true crime to topical news, it can be a struggle to work out how to attract an audience.

At a panel at the London Podcast Festival (14 September 2019), three hosts of podcasts aimed at underserved communities explained how they succeeded in getting their voices heard and expanding their pool of listeners. 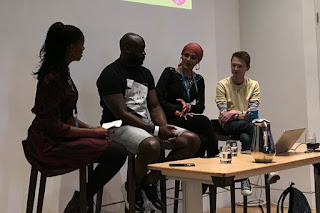 Posting on the variety of different platforms does not have to eat up a lot of time or money.

Host of #QueerAF Jamie Wareham said that his listenership doubled over the course of a series through spending as little as £20 on boosting a video trailer to specific target audiences through Facebook. When doing this, he makes sure to not only to target LGBTQ+ and podcast communities but also groups interested in the general topics discussed in each episode.

For Marvyn Harrison, founder of Dope Black Dads, posting on social platforms is a case of trial and error, determining what works for your audience and what does not.

"Don’t be fearful of trying things and doing really badly and figuring it out because, once you do, you’ll grow faster than you would if you outsourced it."

Leverage your community
Even with the omnipresence of social media in our lives, word of mouth is still an important factor in building up an audience.

Dope Black Dads, which began as a WhatsApp support group for black fathers, benefits from groups within its community independently sharing their content and amplifying it.

Host live events
Hosting live events to bring your community together in the real world and making appearances on similar podcasts also allows you to reach people beyond your circle of loyal listeners.

"Even if you only get ten people there, if you get a good picture of you at your live event that is shot well, that’s really useful for marketing," Wareham added.

Pitch it
Getting your podcast commissioned by a company can be extremely beneficial to expand your audience, as it can invest time and money in production quality, promotion and inviting guest talent to feature.

However, Harrison explained that this can come with some drawbacks, in particular in terms of editorial control.

"If there’s someone editing and culturally they aren’t connected to what you’re about, they don’t understand where you’re coming from. They’re taking it from their lens."

Define your niche
Crucially though, the key to having a successful podcast is having an issue or a topic that is relatable to a larger audience, alongside an easy-to-understand premise and hosts who are authentic.

Co-host of No Country for Young Women Sadia Azmat explained that taking the time to work out what you want to do, as well as listening to other podcasts to work out what they do well, is essential before pressing record.

"We did six months of prep before even recording a demo, so don’t feel like you need to rush into anything.'

Given the relatively recent development of podcasting as a field, there is still the opportunity to be as creative as you want.

"Podcasting is a really new game and you can make it your own with ways people haven’t even thought of," said Azmat, adding that being sincere, honest and creative from the outset will help organically attract a following.

Determining how successful your podcast is can be difficult, especially when you are starting out. Rather than analysing listens per episode for your new podcast, Harrison advises taking a broader look over ten-episode increments.

"If I had judged it on every episode, I probably would have messed the formula up so much that by the time we got to ten, I wouldn’t quite of understood what we were doing."

Find out how to use live podcasts to drive audience engagement at Newsrewired on 27 November at Reuters, London. Head to newsrewired.com for the full agenda and tickets