posted on 8.10.19
Rockumentary About Record Breaking Indie Band The Pocket Gods Out Now On Amazon Prime! It Explores Their Protest Against Spotify For Fairer Royalties and Frontman Mark Christopher Lee's Battle With Mental Health Issues Which Culminated In A Suicide Attempt Earlier This Year. 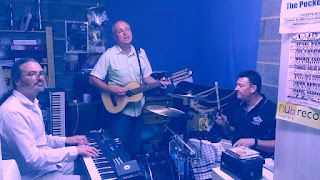 "It's One Flew Over The Cuckoo's Nest Meets Spinal Tap"

Weird tells the story of cult indie band The Pocket Gods since their immaculate misconception 20 years ago in a London record shop. It features the highs and lows of being in an indie band. From being discovered by the late DJ John Peel and obtaining an official Guinness World Record for their Spotify protest albums, to playing gigs to one stoned guy and a scary looking dog.

The film also charts frontman Mark Christopher Lee's battle with depression and mental health issues which have plagued his life since being abused as a child. This culminated in him taking an overdose in a suicide attempt earlier this year and he's now determined to encourage others to seek help and support for these issues.

It also goes into detail on how the band created the 30 second song idea which led to a world record and features in Billboard, ITV news, BBC News and The Independent. Spotify pays out a paltry royalty of about 0.007p evert time someone streams a track for 30 seconds.

The track could be 7 minutes long and it still would only get 0.007p. So the band though why write songs longer than 30 seconds if you're going to be paid such a rubbish amount. They then put 100 of these on an album to make it sound impressive and the 100X30 series of albums was born. There have been nine of these including the 300X30 album which holds the official Guinness World Record for most tracks on a digital album - 298:Guinness World Records - Most Songs On A Digital Album

Here are a few quotes on the band and the film:

"There's no-one quite like the pocket gods!" - Seymour Stein - Music industry legend and the man who signed The Ramones & Madonna.

"The Silence has been deafening about men and mental health until now. Through the language of music and intimate anecdote, Mark Christopher Lee opens the dialogue about depression, family ties and the ongoing struggles against demons real and imaginary."