posted on 2.10.19
Kobalt and the Choir with No Name (CWNN), a UK charity running choirs for homeless and marginalised people, are releasing a very special version of ‘This Is Me’, to coincide with World Homeless Day on 10 October 2019. 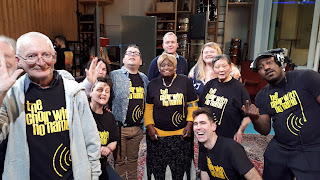 The Choir with No Name currently run choirs in four cities in England, with over 170 members from the homeless community singing with them every week. Thanks to funding from Arts Council England and Ocorian Trustees, and their partnership with global music services company, Kobalt, they were able to offer their choir members the experience of a lifetime by taking them into professional studios to record a single. The resulting uplifting version of The Greatest Showman’s global hit, ‘This is Me’, will be released on October 10th 2019 with an accompanying video shot at the studio sessions in Liverpool, London and Birmingham (Director: Alpha Barrie, Producer: Dave Graham, Crossfire Productions).

To further raise awareness, the charity will launch an accompanying digital #ThisIsMeinthree campaign, asking followers and influencers to describe themselves in three words, as well as highlight the three words chosen by homeless choir members and their accompanying stories.

Thanks to the support of AWAL and Kobalt, all money raised through global distribution of the single will fund CWNN’s work offering a supportive, life changing choir community to over 1000 people affected by homelessness and marginalisation every year.

‘[It was] an incredible experience that I can say eclipses being homeless. This is a sign of things to come - I will be back on my feet! I feel so blessed and humbled to be part of a project that gives people hope. CWNN has saved my life.’

‘This Is Me is a song about stepping out of the shadows and being proud of who you are. At the Choir with No Name, we celebrate our diversity, individuality and potential. We are mothers, fathers, daughters, sons, grandmas and grandads. We are football fans, dog lovers, students and musicians. We’re not a nameless, homogenous mass of ‘the homeless’. We want the world to see homelessness as a systemic problem, not a personal affliction, and get engaged in the fight to end it.’

“I am touched by what the Choir with No Name does. It brings me enormous happiness to see how music can have such a positive impact on people in need. Our support is part of an effort to bring more attention to this issue and a testament to the work The Choir with No Name is doing. I encourage everyone to see for themselves what can be done, and to help.”

The single, video and #ThisIsMe stories can be found at: www.thisisme.org.uk

The single can be pre-saved and pre-ordered at https://awal.ffm.to/thisisme

The Choir with No Name’s choirs will be performing ‘This Is Me’ in Birmingham, London, Liverpool and Brighton on or around World Homelessness Day 10th Oct 2019. Further details will be announced via the www.choirwithnoname.org website.