What is art? - a pamphlet

The misguided attacks on ‘This Land Is Your Land’

posted on 28.8.19
"In recent years, Woody Guthrie’s “This Land Is Your Land” has become a rallying cry for immigrants."

"But not everyone sees the song as an anthem for inclusion."


In this article about Woody Guthrie's iconic song the rights and wrongs of the lyrics are discussed and some valid points are made both for and against. My own personal feeling is that Woody was singing about his world to people that mostly only knew about the world in terms of America. I don't doubt that as a socialist he would have been against the concept of isolated countries, preferring to accept all of humankind as one nation. We can't own land as individuals. Land is a common treasury for all.

You can read it here. 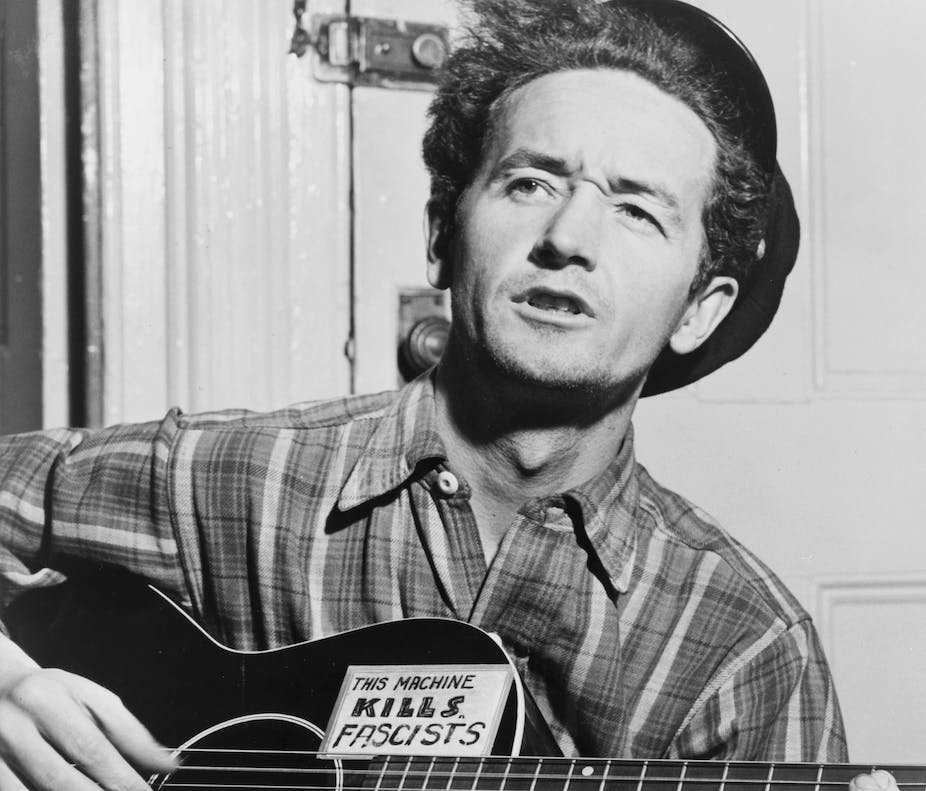 The misguided attacks on 'This Land Is Your Land'


Will Kaufman, University of Central Lancashire

In recent years, Woody Guthrie’s “This Land Is Your Land” has become a rallying cry for immigrants. And in July, after President Donald Trump tweeted that four Democratic congresswomen of color needed to “go back where they came from,” Congresswoman Alexandria Ocasio-Cortez, one of the four targeted, responded with a tweet quoting Guthrie’s lyrics.


But not everyone sees the song as an anthem for inclusion.

In June, the Smithsonian’s online magazine, Folklife, published a piece that lambasted the song for its omissions.

The article, titled “This Land Is Whose Land?,” was written by folk musician Mali Obomsawin, a member of the Native American Abenaki tribe. She wrote of being shaken up “like a soda can” every time she heard the song’s lyrics:

“In the context of America, a nation-state built by settler colonialism, Woody Guthrie’s protest anthem exemplifies the particular blind spot that Americans have in regard to Natives: American patriotism erases us, even if it comes in the form of a leftist protest song. Why? Because this land ‘was’ our land. Through genocide, broken treaties and a legal system created by and for the colonial interest, this land ‘became’ American land.”

“Commie Folksinger Woody Guthrie Not Woke Enough for Mob,” jeered Breitbart’s John Nolte, delighted with this evidence of internecine strife among what he dubbed the “fascist woketards” of the American left. The Daily Wire’s Emily Zanotti soon joined the fray, penning a piece under the headline “This Land Is NOT Your Land: Woke Culture Now Demanding Woody Guthrie Be Canceled Over Folk Music Faux Pas.”

But Obomsawin and her conservative critics might be surprised to learn that some of Guthrie’s greatest champions have also had difficulties with the song.

As the author of three books on Guthrie, I sometimes wonder how the folksinger would respond to the criticism of “This Land Is Your Land” for its omissions.

While we can’t know for sure, a glance at some of his unpublished writings and recently discovered recordings can offer some clues.


Pete Seeger, Woody’s colleague and protégé, was perhaps the most responsible for lodging “This Land Is Your Land” in the public consciousness. After Guthrie died in 1967, Seeger continued to perform the song all around the world.

At the same time, Seeger made it clear that he was sensitive to the theft of Native American lands.

In his memoir, “Where Have All the Flowers Gone,” Seeger recalled an incident during a 1968 performance:

“Jimmy Collier, a great young black singer from the Midwest, was asked to lead [‘This Land Is Your Land.’] Henry Crowdog [sic] of the Sioux Indian delegation came up and punched his finger in Jimmy’s chest. ‘Hey, you’re both wrong. It belongs to me.’ Jimmy stopped and added seriously, ‘Should we not sing this song?’ Then a big grin came over Henry Crowdog’s face. 'No, it’s okay. Go ahead and sing it. As long as we are all down here together to get something done.’”


Sometimes, in an attempt to ease his conscience when performing “This Land,” Seeger would add a verse penned by the singer and activist Carolyn “Cappy” Israel to acknowledge the theft of Native land:


Was Guthrie himself uncomfortable with the song’s glaring failure to acknowledge the facts of settler colonialism?

There’s no record of his views on the issue. But we do know that he was very aware of – and concerned with – the history of Native American dispossession.

For example, he was angry enough with his cousin, the country singer “Oklahoma Jack” Guthrie, for claiming credit for a song that Woody had written, titled “Oklahoma Hills.” But as Woody wrote in an unpublished annotation to the lyrics, Jack had also left out “the best parts of the whole song” – the names of “the Chickasaw, Choctaw, Cherokee, Creek and Seminole” who had prior claim to the lands of Oklahoma.

Then there’s a soundbite in a posthumously discovered live recording from 1949:

“They used dope, they used opium, they used every kind of a trick to get these Indians to sign over their lands,” Guthrie says to the crowd.

One of these real estate tricksters was actually Woody’s own father, Charley Guthrie. As biographer and journalist Joe Klein writes in “Woody Guthrie: A Life,” “Because he was able to speak both Creek and Cherokee, Charley became known as especially adept at relieving Indians of their property.”

How did Charley learn these Native tongues? Was it possible that the Guthries had Native ancestors?

In a tantalizingly vague 1950 letter to activist Stetson Kennedy, Woody notes “the rainbow blends” of his own bloodline, including “pure virgin island negro” and unnamed “Indian tribelines.”

And in an unpublished poem entitled “Sweety Black Girl,” written the same year, Guthrie writes:
Guthrie admitted that he was ashamed of his father’s disreputable real estate practices. And while he may have idealized his own genealogy, there’s no doubt that he was fully aware of “whose land was whose.”


Interestingly, not all Native Americans view the song in the same light as Obomsawin.

The song has proved adaptable and malleable enough to enable some Native American artists to work with it.

In 2007, the Anishinaabe songwriter and musician Keith Secola sang his Ojibwa-language version of “This Land” on the album “Native Americana — A Coup Stick.”

Secola said in an interview that his version “reflects a worldview, of being a part of the world and not detached from it. Woody was into people creating their own stories. … That’s what I got from him – how to apply this strategy, this procedure of songwriting, to the topics that affect American Indians.”

A few years before Secola’s cover, two of Guthrie’s previously unpublished songs – “Indian Corn Song” and “Mean Things Happenin’ in This World” – were recorded by the Navajo siblings, Klee, Clayson and Jeneda Benally.

“We wanted to keep the spirit of Woody Guthrie alive,” Clayton said in a 2012 interview. “He wrote songs about the Dust Bowl and unions, but he also wrote about American Indian issues.”

Clayson noted that “Indian Corn Song” was one of his favorite songs to play, because in it Guthrie “talks about wastefulness and how Indigenous people are … living off the planet in a balanced way.”

Mali Obomsawin might take heart from Secola, the Benally siblings and the other artist-activists who have adopted and adapted “This Land Is Your Land.”

Woody Guthrie might not have been perfect, they say, but we don’t need to “cancel” him.

We’ll work with him instead.

Will Kaufman, Professor of American Literature and Culture, University of Central Lancashire