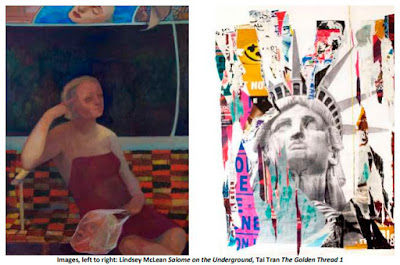 Artist Carey Young has chosen 19 emerging artists for Bow Arts’ annual Open Show, with a call for works that respond to “our current political moment”. Choosing from some of the charity’s near 500 studio holders, many of whom are showing new pieces, the result is a selection of artistic works which engage with varied political themes including politics, migration, gender identity, borders and climate change; poignantly and critically addressing some of today’s most pressing cultural conversations.

Young has made a selection that explores these themes in varied and often witty ways. For example, Lindsey Maclean’s painting ‘Salome on the Underground’ (2017) presents a seated, nonchalant young woman on the Tube, her plastic bag holding the head of a man, while Marcus Orlandi’s papier-mache sculpture ‘Man Sandwich’ wittily presents a ham sandwich as if also, somehow, a codpiece – sending up male vulnerability.

In ‘Insulae’ (2019), an innovative new video work investigating the idea of an ‘island mentality’ by Nye Thompson, Google Earth has been repurposed to create a video artwork in which we fly over the waters just off the British mainland. In contrast, ‘Performing Identities’ (2017-18) by Almudena Romero uses an archaic tintype photographic process associated with the Victorian era to photograph people who consider themselves immigrants.

Victoria Burgher’s ceramic installation ‘Surviving’ (2019) has been laminated with golden survival blankets, and displayed like an archaeological find, as if re-examining this symbol of migration so familiar from recent news. Tai Tran also considers his own identity as an immigrant in his collage ‘The Golden Thread 1’, using torn imagery of the Statue of Liberty to consider relations between myth and reality. Additionally, Bernie Clarkson’s witty painting ‘A cry for something to be done’ (2010) is a faux-naïve, colourful portrait of an older woman, head in hands, as if totally exhausted by the current state of the world.

Young, whose own practice has developed from a cross-fertilisation of disciplines including law, business and politics, says of her selection:
“East London is rich in its diversity of population and culture. This exhibition, with its talented and insightful artists, feeds into this inspiring atmosphere of change.”

The Bow Open Show is the only exhibition in the Nunnery’s programme to present Bow Arts studio artists exclusively, and is highly anticipated for presenting some of London’s most exciting recent artwork.